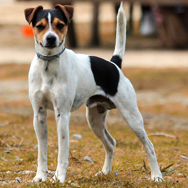 Unlike humans, this tear is often the result of subtle, slow degeneration that has been taking place within the ligament rather than the result of trauma to an otherwise healthy ligament. This is why approximately half of the dogs that have a cruciate ligament problem in one knee will, at some future time, develop a similar problem in the other knee.

Extra-capsular suture stabilization  – This is a traditional surgical treatment that has been performed for many years. The concept of this procedure is to replace the function of an incompetent cranial cruciate ligament with a heavy monofilament nylon suture (a specific brand of fishing line is typically used) placed along a similar orientation to the original cruciate ligament, but outside of the joint (the actual ligament is inside the joint). The suture needs to stabilize the tibia (“shin-bone”) relative to the femur (“thigh bone”), while allowing normal knee movement, until organized scar tissue can form and assume the stabilizing role. These techniques tend to have a little bit too much “give” for larger breeds and active dogs, but seem to work reasonably well in small breeds and inactive dogs when performed by an experienced surgeon. Postoperative care at home is very critical and involves strict activity restriction for ~ 6-8 weeks. Premature and excessive activity risks complete or partial failure of the stabilizing suture that can render the surgery a complete or partial failure.

Tibial tuberosity advancement (TTA) – This method makes a linear cut along the front of the tibia (“shin-bone”). The front of the tibia, called the “tibial tuberosity” is advanced forward until the patellar tendon is oriented approximately 90 degrees to the tibial plateau. This orientation renders the knee relatively stable, independent of the role of the cranial cruciate ligament. The amount of advancement needed to obtain this orientation is determined from x-rays. The cut in the bone is stabilized by the use of a bridging bone plate and screws.  We prefer this method to Extra-capsular Suture Stabilization in active dogs, young dogs, dogs over  40 pounds and dogs that have a relatively stable knee to start with (suture stabilization doesn’t seem to be able to improve these patients much). Dogs who get a TTA tend to start using the leg much quicker and research shows that they have a much more normal movement in their knees postoperatively leading to less arthritis as they get older compared to the Extra-capsular Technique.  In some dogs, we discover during their preoperative planning that their knee structure does not lend them to safe or effective application of this technique.  You do need to restrict activity for 8 weeks after the surgery and a followup radiograph is needed at 8 weeks.